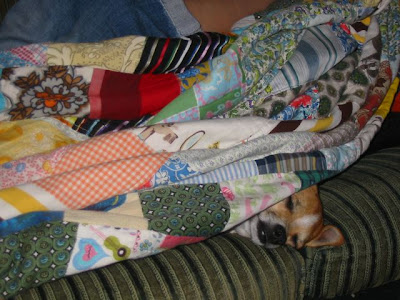 Little Lord Fauntleroy, a.k.a. Ducky, lies with me on the couch one evening.

We had a house guest while my sister Karen was gone for several days to a fly-in fishing camp in northern Saskatchewan: my niece Danielle's deerfaced chihuahua, Ducky. He is the only pet I welcome inside the house, because I am not a housekeeper (the hair that needs to be vacuumed; the hair that attaches to your coffee cups and plates whether you vacuum or not; the kitty litter if you have a cat; the likelihood that cats will walk on your tabletops and counters if they damn well feel like it) and Scott also prefers outside pets. But there is something about Ducky; of course, he is used to being indoors at Karen's and so I'm not about to stress him out by making him stay outside. Lord no— he shivers even in the dew of a mild summer morning, sat beside me on the step as I drink my coffee! And fortunately he thinks he's a farm dog and likes to be outside quite a bit, so did spend most of the first two days outside with our other dogs (the pup, Chloe, would not leave him alone for a moment, but our old dog, Casper, welcomed the break from the pup's constant attention). However, wherever I am is where Ducky wants to be, and I love him to pieces. What can I say. It's not that I don't love the other dogs ... but Ducky is so small, so quick, so cuddly, so adorable, so responsive, so clever ... I've always had a soft spot for him and have told Karen that if ever he needs a new home, I'll take him. Scott may not like it, but ... that's the way it will be (apparently my sister and I have that in common too, as well as our voices; but I also know that Scott, unlike Dick who has lived with him underfoot for some four years, has already warmed to Ducky). I kept him at Christmas when Karen and Dick went away for a few days, and missed the little guy when he went home again.

Scott came home early one morning to get some paperwork and on his way out the door asked Ducky if he'd like to go out for a bathroom break. Ducky went straight to his kennel, which was sitting in the porch with its door closed (but not latched) on the floor. The little dog deftly opened it with one paw and scooted inside. Scott and I both chuckled as if over the antics of one of our children.

Everett thought we should come up with a fancy nickname for Ducky, like Milton Shooberdedoop the Third. I suggested Little Lord Fauntleroy, as Ducky strikes me as a somewhat dandy little gentleman. Everett agrees, that is perfect.

Then I went online for a refresher course about Little Lord Fauntleroy, and discovered a story I hadn't remembered at all well: here it is.