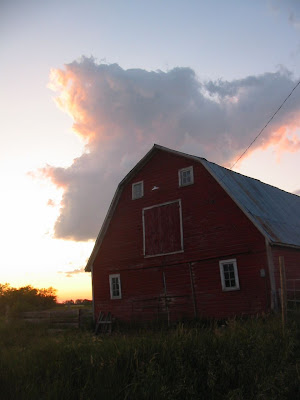 The barn in its third incarnation.

Scott tells me that it was first the livery barn in Wadena and was more than 100 feet long (now it is about 52). It was taken apart and moved to a farm north of town, and later dismantled again and moved out to GG Farm.

Its roof, the loft floor, and various other spots are in need of repair. However, it must wait its turn. For now, the house comes first. Yesterday Scott cut out and reframed the dining room wall to prepare for the new window. He thinks he bought too large a window. "It will be like having a picture window in the kitchen," he said, "and I should have bought it only four feet deep, not five. The kitchen table will be visible from the front yard."

Oh well. He may not be happy with it, but I am thrilled with the hole in the wall alone!
Posted by Blondi Blathers at 9:58 AM 1 comment: