Yesterday and last night, storm winds and rain beat against the walls of the house. This morning I got out of bed, looked out the window, and groaned: 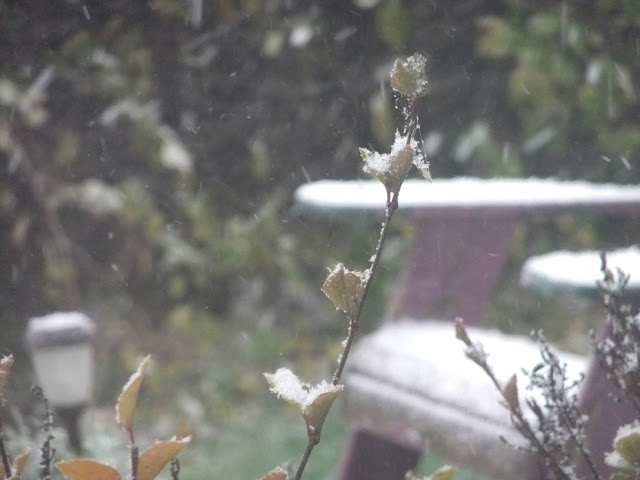 And yet here, inside, I am warm and cosy, with nowhere I have to be; in the lap of luxury.

The groan was more about the perennials I haven't finished digging and/or pruning, and about the field of flax Scott still has to take off, although the snow won't stay long and there will surely be an opportunity to get the harvest in. We did get about two inches of precipitation though, before the snow, and that doesn't help.

I've booked a flight to Kelowna for the end of the month (thanks for the air miles, Pop! I didn't want to spend money on travel when I'm not working, although that is the best time to take a trip, isn't it — when you don't have to hurry to get there and back in a finite number of days) and Joan just texted that she is already making up the guest room for me. It's too bad our sister Karen won't be there at the same time, as it is such a pleasure for the three of us to be together, but her plans and mine haven't meshed this fall. She and her hubby are going at Christmas, while I avoid air travel in winter (long delays sat in planes on tarmacs while they de-ice the wings is not for me); but I've offered to house-sit with her three small dogs while they're away. Christmas, to me, has become a day like any other and I'm not sentimental about it, though I have fond memories of family Christmases in the distant past. I'll think of my week at Karen's as my Margo Retreat, when I'll have many opportunities to go and see relatives and old friends during the time I'm alone there.

Even though Margo is only 20 minutes down the road, I go there infrequently. One afternoon this week I went to Karen's to get some cheesecloth (to strain the motherwort tincture I made), and hoped the two of us might go into the village and to Mom's grave in the cemetery on its periphery. Karen had already been to town that day so instead we had a cup of coffee and a good long chat at her place, looking through the glass of her picture window at the lake upon which floated dozens of gulls and Canada geese. When I left, I hesitated a long time at the corner where I finally turned toward home, rather than toward Margo, which was tugging hard at my heartstrings. Home is home, I guess, and always will be. But I made the "sensible" choice and came home to GGFarm before dark descended and moose and deer would be more of a danger on the roads.
Posted by Blondi Blathers at 11:50 AM 4 comments: