Clearly, the weather has been fine and nobody is indoors.
Not only have I fallen down on my daily blogging because of it, but not one person responded to my newsletter mailout -- did anyone even receive it? I can't help but wonder.
However, I blame it on the weather and people's good sense. We've all got spring fever and are out and around, where we should be.

The farmer boys have finished seeding.
Scott and I went for a drive around the countryside, which is nice and green where the tent caterpillars haven't eaten:


He has been out preparing the space for his vegetable garden. You are seeing less than half of the total area behind our house that he will seed to grass, leaving a regular gardening spot: 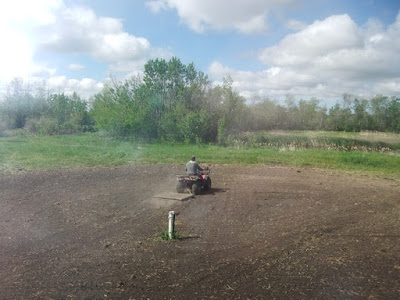 On Sunday, Everett and I drove to the animal shelter in Humboldt and brought home a lovely four-year-old kitty for him to love. I haven't got a photo of the two of them yet but I will. What I do have is a picture of the heavy plate I purchased for 50 cents at a garage sale in Watson on the way back. It will be going to the office with me tomorrow: 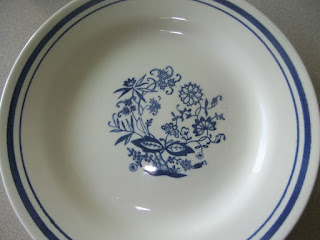 Yesterday I worked here at my desk for an hour and then jaunted off to Margo. It was my turn to see that newborn baby! Little Everley Grace. As some of you know, Grace is my mother's name, and I was very pleased and deeply touched to see the wee girlie given this name.

She slept like an angel the whole time I was there having tea with her mother and grandmother (my sister Karen). Then Michelle took pity on me and brought the hungry little girl out, so I got to hold her and give her a bottle. What a darling. A hungry darling. Her older sister is struggling a little with the change in family dynamics, but that seems pretty common. Her mom and dad are giving her as much attention as they can.

While the baby was getting a diaper change, I was in the bathroom taking a photo of the stained glass that Karen made: 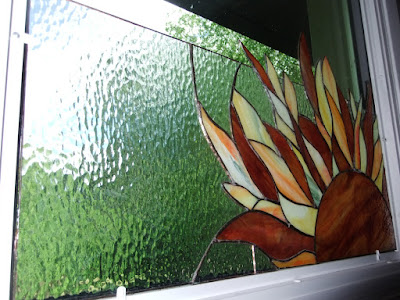 Which reminds me, I still haven't purchased the wire I need to hang the stained glass she made for me.

It's a grey, coolish day, although the forecast was for 30F heat. We've put a beef roast into the oven and Dad's coming over for supper. I've warned him that there is less than half of one of those big bottles of white wine left, but we have rye, vodka and scotch.

Aunt Reta phoned last night from Phoenix. She and Uncle Carl are coming out in July for the mini-reunion. And Cathy R and I have made a plan for a short road trip to the Edmonton area the following weekend, when I'm on holidays from the newspaper.

And now, it's out I go to dig some more flowers into their pots. and curse at the ants that are already living in them. I guess they'll be cursing right back at me for the great disturbance I'm about to cause.

Ralph Goff on "Dog Germs":
Those tent caterpillars are the worst I've ever seen. Big bushes in the hundred acre woods are leafless looking like fall or early spring. They were literally raining down on me the other day. Good thing I had a wide brimmed hat. Then they were crawling up the legs of my coveralls. Between them and the wood ticks I almost forget about the mosquitos.

My only comfort is that they say the leafless plants will come back.
It's the ticks, though, that are making me wonder if I might go live somewhere else for a couple months of the year.


Lori on "Dog Germs":
Yuck! I'm with you on the "dog germs". About 'coons: This week I coiled chicken wire around the perimeter of the deck to stop them from going there. Apparently they don't like the smell of ammonia (neither do I), so I have rags soaked in ammonia strategically placed where they climb up. Raccoons are a big problem here and they are well adapted to urban life. Our "food" is top notch. A CBC doc about them basically said we need to learn to learn to live together...accommodate. :)

We have to try to do that in the country too, although when they get to be a problem, it is not always easy or humane to put a stop to shenanigans. You may have a pack of coyotes attack and kill a newborn calf; you can't accommodate, alas, but have to decimate their numbers. You may have raccoons tear the shingles off your house or kill your barn cats; costly damage can't continue and you need your barn cats to control rodents; I don't know if raccoons help with that, although they are meat-eaters so maybe. I don't think they eat the cats! But I don't know.  Right now the property owners who farm are having their land flood due to beavers, so there is a war on -- a cull -- where the government is paying $35 for a beaver carcass, and people are shooting them. It's said that won't solve the problem but they're doing it anyway. It seems terribly unfair to the beaver and to the natural ecosystem, yet one can see the farmers' frustration too. One of our reporters at the newspaper has just done a good article on different ways of controlling the problem, but what works in one place doesn't always work in another. I'm sure there is a balance that can be found, but we are still a long way from implementing it for the good of both human and wildlife.
There are some natural behaviours in animals that are really hard to put up with. Like when we had cats and they'd catch the birds around the yard. I hate that.
You will have to let me know how well the ammonia-soaked rags work!


Lorna on "Dog Germs":
Cat and dog germs! I'm totally shivered.
As for the table, we don't allow technology, but we do allow books and magazines, which both can be read on an e-reader, so the wedge is in.

It's all reading and writing, isn't it!