We lost our Jenna Doodle last weekend.
She’d gone under Scott’s half-ton to lay down while he was loading fenceposts into the back. She never goes under vehicles so he didn't expect her to be there and didn’t see her.
The first I heard of it was when he came into the porch and yelled, “Find a vet! I ran over Jenna!”
I called the vet in Yorkton, where Scott has taken Ducky for his scratching (which is still an unsolved problem). It would take over an hour to get there. Scott phoned a vet in Preeceville, an hour from here, and described her injuries; it sounded like the dog would have to be euthanized, the vet said.
At her age — she was 13 or 14 — there was no point in putting her through more hell. Even surgery, were it an option, would be too hard on her.
By the time I threw on some clothes and headed out to see the situation for myself, Scott was sitting beside her on the grass in the outer farmyard and she had tried to move, he said, toward his hand, and so what I heard and saw as I approached was her crying and writhing in pain for 10 or 15 seconds that seemed like forever. There was no way she would not suffer terribly over rough roads on a trip to the vet, even if it was only a half-hour drive; and then just to be euthanized.
“We have to shoot her,” I said to Scott. “We can't let her suffer."
“I can’t do it,” he said.
“Do you know someone who can?” I said, wondering if I had the guts to do it myself. I like to think I would if no one else could. But last time I fired a rifle was at age 17. What if, now, I wasn't a good shot and one bullet didn't do it? What if I caused her fear and more suffering? It needed to be one shot; it needed to be instant death.
Scott's brother Bruce said he’d come over.
I went out and sat with Jenna for a few minutes, caressed her face, thanked her for being a good dog, told her it would soon be over, that we would see to it. I comforted her as best I could and said my goodbyes. Scott brought a double lawn chair to shade her from the sun, and we sat with her. Finally I left him there and came back into the house. 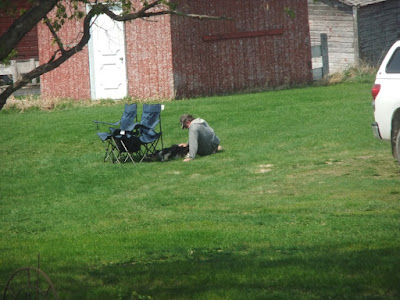 He felt terrible, of course, and all I could really do was say that accidents happen, don’t blame yourself. We are doing what has to be done, now, for her sake.
I tried to keep busy, not knowing what to do with myself. I took the garbage out and tidied the kitchen, but didn’t want to hear the gunshot. I went to the south side of the house, into the office, and put the radio on.
By the time I looked out the window again Jenna lay stretched out, unmoving, on the ground and Bruce was taking a shovel from the back of the truck. It seemed to take him (maybe them; I suppose Scott was helping, but I couldn’t see the burial spot) a long time to dig a grave for her in a quiet corner of the yard, in the trees where Casper (our last old girl) is buried.
It was hard to look out, seeing Jenna’s body there. Her suffering was over, but it was sad just the same; a rotten way for her faithful, gentle life to end. When I saw Scott and Bruce walk out of the trees toward her body, my heart broke for Scott. I knew it would be killing him to see her and pick her up, and that he would do it gently, as if she were still alive, and that he would feel like crying but would not do so in front of his brother. Together they carried her to her final resting place.
It was all I could do to step outside later, aware that she was not coming to greet me as always, wagging her tail and “talking” with excitement because we might be going for a walk.
The next day I visited her grave and threw all my poppy and lavender seeds onto the freshly turned soil.
Who will keep us awake at night now, cursing at her barking as she warns off the coyotes/foxes/raccoons/whatever prowling the perimeter of the farmyard? Who will meet us in the driveway with a toothy doggie smile when we come home at the end of a working day? Who will flop onto the ground and roll onto her back for a belly rub as soon as we pat her head for more than two seconds?
Weep at the death of a dog? Of course. We said goodbye to a friend; a sweet, gentle spirit we loved, who loved us.