It Was a Rodeo 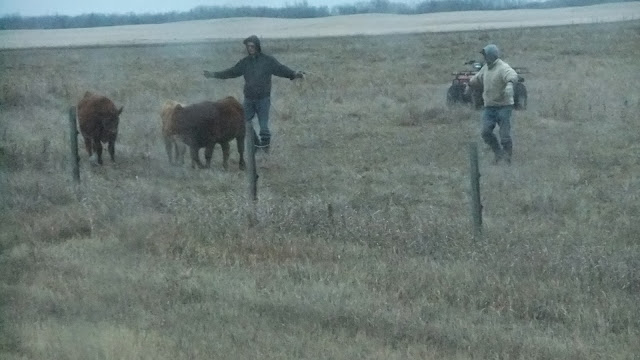 Darkness was beginning to fill the cool, moist air, and these three young calves couldn't figure out where the boys wanted them to go. It's not that they wouldn't comply. It's that they were confused; their mothers had already been herded to a pasture closer to home, and these three had gotten separated from the rest.

Here Bruce and Scott are trying to get them to step between the fenceposts to cross through the ditch, over the road, and to a stubble field on the other side. Half the battle was that the calves are accustomed to an electric wire between those posts, and they weren't too anxious to take a chance of getting shocked. You could almost hear their brains: "What? What? Why are they trying to get us to touch the fence? I'm not doing it!"

I was enlisted to help, but am not too adept at chasing cattle so the most I could really do was bring the truck up to where the boys had had to gallop on foot after the beasts, which can run pretty darn fast when they decide to throw their heads up and bolt.

In other news, we got snow during the night. About 15 miles north of us, they got six to eight inches of it. I wore my ski pants and Sorels to work today.
Posted by Blondi Blathers at 8:41 PM 3 comments: