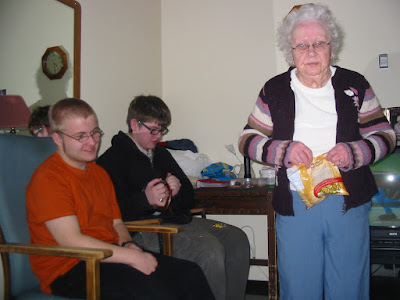 This isn't a good photo of Grandma but it's the best I can do since the lodge is quarantined due to the Norwalk virus. Aunt Reta, who came up from Phoenix for Uncle Bruce's funeral, won't be able to visit Grandma one more time before starting her trek home on Saturday. How much does that suck, after coming all this way and being unlikely to get back for some time?

The picture above was taken during a recent visit to Grandma. I took her a bag of Werther's toffee and she seemed to enjoy handing them out. It's just over a year since I moved her from Wadena to Kelvington. She weighed 72 pounds at that time. Since then, she's gained more than 30 pounds and twice I've had to go shopping for pants another size larger. She's gone from wearing 6Petites to 10Petites. Has her health improved that much? Well yes; she was in horrible shape the day I moved her. She had to go by wheelchair everywhere and I needed helping getting her in and out of my vehicle. She'd insist on trying to walk herself, and for the first few days the staff kept a belt around her waist so they could keep her from falling while they walked beside her.

This afternoon I had a real treat. I glanced out the office window and saw, on the other side of the frozen slough behind the garden, a coyote hunting mice by the fence. It was a beautiful young animal with thick luscious fur, rust-hued on the backs of its ears and legs, and a playful attitude. It pounced at a spot on the snow and then dug frantically, and the next thing I knew a small dark rodent stood out against the white snow, on its hind legs as if it was calling the coyote out for a duel. The coyote danced with the mouse for quite a while, almost coyly and with what appeared to be a slight, sweet smile, before the mouse disappeared into the coyote’s narrow, sharp snout. It pounced and dug, sticking its nose into the snow several more times, while a hopeful magpie watched from a fencepost just feet away.

Finally I heard growling from next to the house; our beast Chloe had noticed the wild dog. In a few moments she started barking and the coyote threw its head up in surprise and looked toward the house before bolting reluctantly toward the line of trees to the south. It went barely through an opening and then stopped and turned to look back at the dogs, both of which were now barking. The coyote took a few more steps onto higher ground (or higher snowbank) behind a few trees and laid down to watch the dogs. It wasn’t until they lit out toward it that it leapt up, yipped as if to complain about the inhospitability of these damn domestic servants, and ran out the other side of the trees and along the edge of the field, out of reach of my binoculars.

Naturally my camera wouldn’t turn on because the batteries were dead. Can they not invent a camera that will notify you when your batteries are getting weak before they're actually dead, so that one doesn’t miss such opportunities? You'd think so.
Posted by Blondi Blathers at 11:43 PM 2 comments: