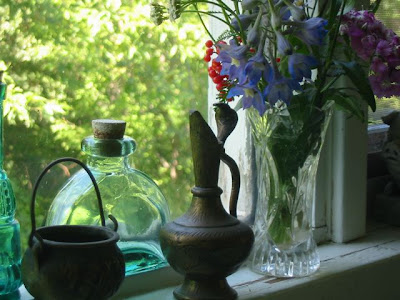 Some flowers normally blooming in July are blossoming now. It's been a strange summer.

Don't suppose you've gathered that I've got a thing for brass? Aunt Jean gave me that little cauldron on the left after asking me what I'd like from her china cabinet. On the front of the cauldron is a witch stirring a pot over a fire.

There's been a full or nearly full moon all week, and it shines directly onto the bed. After some six years in a basement bedroom with a north-facing window, always closed, I was tickled to be able to have the window in the bedroom at GGFarm open all night several times this week. Summer's been too cool for this, till now. I bask in the bright moonlight like a sun-shy vampire.

Everett is applying the third and final coat of paint to the lawn furniture. He was pleased to receive an honorable mention at school for having an average in the 80s last year. He was surprised to get anything, he said, because he always thinks he's dumb. This is so weird. Where does he get an idea like that? It's so far off the truth, and he's had plenty of experiences that prove it.

Emil's barricaded in his bedroom, listening to Dead Can Dance. When I arrived an hour ago, it was Valdy I heard through the door while rinsing some fresh feverfew clippings and taking the dried basil leaves off their stems. The dehydrator's been running for many days. Yesterday I brought in more calendula flowers; can make a skin cream out of them, or tea. The ones dried last week are in a jar with olive oil for cooking or salad dressing.

I'm wearing a new skirt, expecting Scott to arrive any time to get cleaned up. I'm taking him out for his birthday supper, along with our friends Faye and Rick. We're off to The Old House Café. Just need to wash my sticky-up hair before we leave. Made the mistake of using my texturizing shears on it a little too enthusiastically. Oh well. It always grows.
Posted by Blondi Blathers at 3:20 PM No comments: