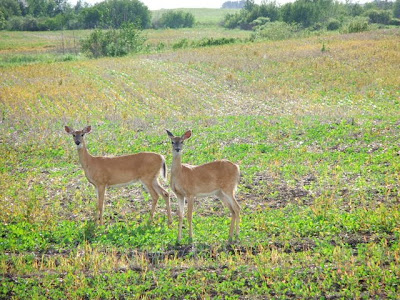 You can't go anywhere in the Saskatchewan countryside without seeing whitetail deer, and you have to be careful when driving, especially at night. Deer are hit by vehicles all the time, and killed. It's sad, really.

These two crossed the road ahead of me and Emil one afternoon and stayed put long enough to let me stop the van and get a photo. I guess they found us worthy of a second look before they bounded off across the field.

Last night we drove northward to Scott's aunt Leithe's to pick up a cage for our dog Casper -- something to put her in when it thunders, as she chews anything she can reach: door frames, mud flaps, shingles on the quonset's curved roof that reaches to the ground -- and yet needs to be where there is shelter from rain so you have to chain her near something she can get under. While on a long cord, she wore a path in the grass from pacing during the thunderstorms. She spent last night in this cage, poor girl; as soon as I awoke at 6:30 this morning, throwing off all my covers in a "pre" (according to the dr)-menopausal heat frenzy, I tucked my pyjama bottoms into a pair of socks and went out to release her. I had been dreaming that her collar had worn her fur away right down to the skin, and so on -- that she'd been suffering in that cage -- so was glad to see that she was fine, if rather excited to see me and in a huge hurry to bolt across the wet grass.

Still, I need to get to the vet's for a sedative for her and to pick up Chloe's collar and leash, which was left there when she met her maker. Darn dogs. I still feel bad about having her put down, as if there must have been something else I could have done.

I started out to say that we saw a mother moose and her young one on our drive cross-country last night. Moose were rare around here when I was growing up, and now they appear quite often, but I'm still awed when I spot them. Apparently there is a mother right around our place who has twins. Everybody sees them but me. The ones we saw last night were on the run from our vehicle and that of a friend who was out in his half-ton, looking for a place to set up to hunt beavers. With all the water this year and beavers making dams as they do, they are causing problems if left to let nature take its course.

I haven't seen again the one that was out in our back yard a couple weeks ago, but the inlaws' dog Sara, who comes to visit once in a while and likes to chase birds off their nests around the slough, ran into something out there that made her yelp, bound out of the water, and bolt back to the yard on the double. My guess is that it was the beaver. They've been known to kill dogs, actually; they must be tough.

I turned the computer off yesterday afternoon due to thunder, which means I have to work a couple extra hours today to make up for it. It rained last night and more rain is forecast I believe. Who knew I'd be able to blame the weather for keeping me from my job? I have a surge protector for the computer, of course, but ever since my sister Joan's two-year-old iMac, a twin to mine, was ruined by power surges in her Kelowna neighbourhood, I haven't been taking any chances. She ended up having to buy a new one, and that's a situation I don't want to find myself in. I can think of a lot of other places my $2000 could go.
Posted by Blondi Blathers at 7:59 AM 3 comments: