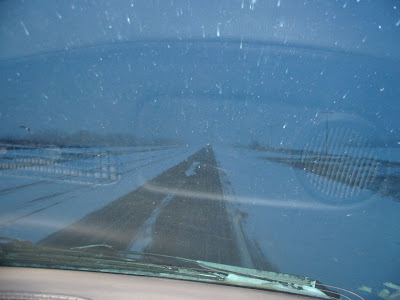 The road to Saskatoon.

Everett and I left before 8 a.m. yesterday in spite of radio warnings not to travel unless it couldn't be avoided. The highway was covered with snow that had fallen through the night and more was expected, bringing with it poor visibility. And of course it had to be about 25-below.

I've heard these kinds of warnings before and then, once out on the highway, wondered what they were talking about. Not this time though. Even though I drove slowly and carefully, it was pretty ugly and more than once I considered turning back. What traffic was behind us whizzed past as if the road conditions were no danger (I don't understand that, but then I was out there so must count myself among the idiots), and what traffic we met swirled up the snow so badly that for a few moments it was nearly impossible to see where we were going.

At the halfway point things were looking pretty bleak. We picked up breakfast at a drive-through and then carried on. The snow had stopped falling and the snowplows were out. I got Everett to the bus depot on time and got him on his way to Edmonton before heading over to Cathy's and having a relaxing cup of tea. Icy roads and deep cold combined with impatient drivers are a terribly stressful combination.

We had a nice visit, I got to see Cathy's girls too, we watched Julie and Julia last night (Meryl Streep -- wow, she is something else) and this afternoon I hit the highway and headed for home. It was minus-20 or so but the highway was decent this time. 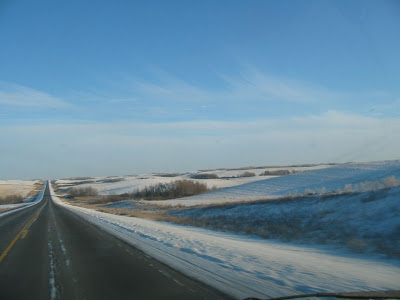