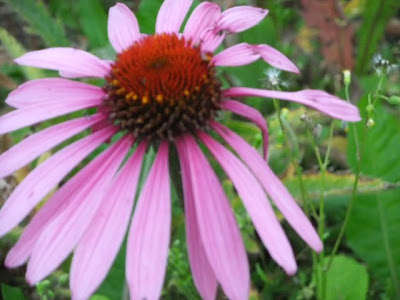 Word is, purple coneflowers are hardy and will spread.

That hasn't been my experience. I plant them pretty much every year and count myself lucky when one comes back in the spring. Then I buy a few more. Never, yet, have I had a nice patch of them. But I keep trying. 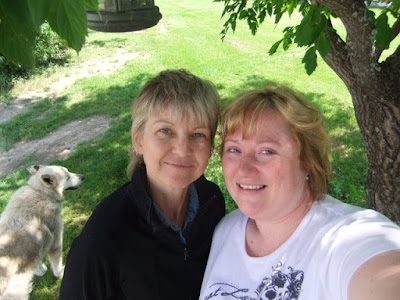 The highlight of the week so far has been a visit from Little Kath, who came out Monday and left yesterday afternoon.

She is the daughter of an old beau who has three kids; when we met, the kids were 11, 7, and 4. Kathy is the eldest, and she was never really a child, and although her dad and I were only together four years, she and I have remained in touch. His youngest sister has also been a close friend since then. I figure boyfriends might only be a way that gal-pals are brought to me. The beaus fall by the wayside, though I still count them as friends, but the relationships with women last a lifetime. I think I was 23 when I met his kids and did my best to "stepmother" them during summer holidays and school vacations, but now, since having two boys to raise from infanthood, I know I could have done a lot better by those three kids and wish I had. 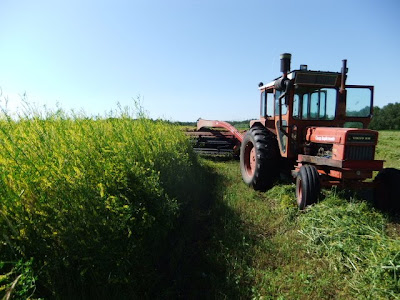 Scott has been busy cutting clover.

And fixing machinery. Seems to me a lot of farm labour is repairing machinery. He bought a used baler last week and has been working on it for two days already. This morning he headed off to the field to cut hay. It hasn't rained for two days. Woo hoo! 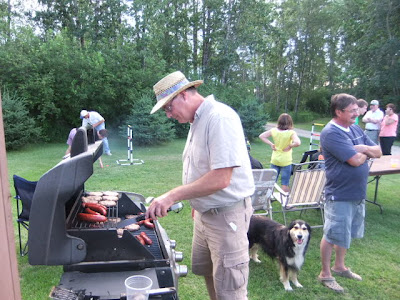 On Sunday afternoon we went to a barbecue at Faye and Rick's. Rick is the burger-meister.

Today I'll be making raisin-rye bread, working here at my computer, perhaps running to town to pay my Revenue Canada late-penalty at the credit union, and looking forward to Shelly's arrival. She's leaving Edmonton in the early afternoon and will get here around suppertime.
Posted by Blondi Blathers at 8:06 AM 7 comments: