Scott is mowing, or I’d be out on the step. It’s cloudy but not too cool.
Today I’ll bake bread. But there is no rush. I have all day and can start when the mood strikes.

Among the books I’m reading — four, right now — is Oscar Wilde and the Murders at Reading Gaol. 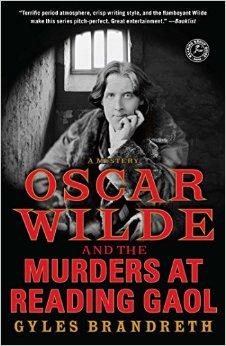 Prison life as described in the novel is appalling. Not only was there terrible deprivation — a board to sleep on, watery gruel for meals, and the threat of beatings for merely looking at anything — but there was to be no contact with other prisoners, no friendships, no human commiseration or support. Prisoners, when moved from one place to another, had to wear a hood covering their faces, with openings only for their eyes. When made to attend chapel, the prisoners’ seats were physically separated by partition so that they could neither touch, see or speak to each other. When they were walked for daily exercise, they had to wear the hoods and pace five feet apart.

Conditions in prisons are different now, at least in so-called civilized countries, but I have often heard people say that prisoners have it too good, with their comfortable clean rooms, three square meals a day, and so on. Not only should they have no luxuries, people say, but everyday life should be harder than it is for the honest person who has to work for a living; nothing should come easy for one who has broken the law and been sentenced to a prison term.

This attitude overlooks the fact that, due to prison reforms and modern reasons we incarcerate law-breakers, prison life is not intended to be the punishment for wrongdoing. The punishment is loss of liberty, itself; imprisonment is only the means of carrying it out.
I refer you to PRISON ARCHITECTURE, which explains it in detail: http://www.thecanadianencyclopedia.ca/en/article/prison-architecture/.

Scott is in; gone to the basement to transfer laundry from washer to dryer, talking on phone; apparently it is "spitting." We hope for rain. We had two-tenths on Friday night; not enough.

All my flowers are in!

Also reading:
• The Complete Works of Oscar Wilde; Picture of Dorian Gray.
• The Devil You Know, by Elisabeth DeMariaffi.
• The Imperfectionists, by Tom Rachman.

Ah, there he goes.
"Byyyyyye ... ," he calls from the porch..
"Wait," say I, getting up from this chair. "Where is my kiss? My hug?"
He waits till I get there.
I say, throwing my arms about his neck, "Work! Is that all you can think about? Work? You're all about work! What about love!"
A quick kiss, and off he goes.

Posted by Blondi Blathers at 8:34 AM 3 comments: