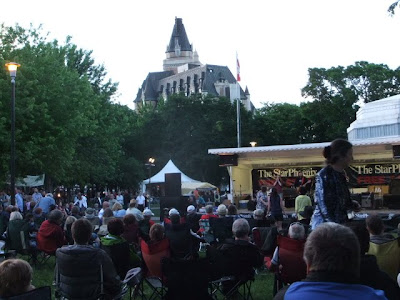 Along the riverbank of the South Saskatchewan River, the city of Saskatoon has built a beautiful new walkway downtown. After an amble over it, we stood in the park and listened to a band from the southern States. The jazz festival is on and these guys were just getting the place warmed up for the week.

*** Reta: I ran into Shannon there. She was on a break from working up north in a camp where they live in tents and have no indoor toilets. Three weeks in, three weeks out. A girl's gotta live, she says, though she is no fan of uranium mining.
Posted by Blondi Blathers at 12:04 PM 1 comment: