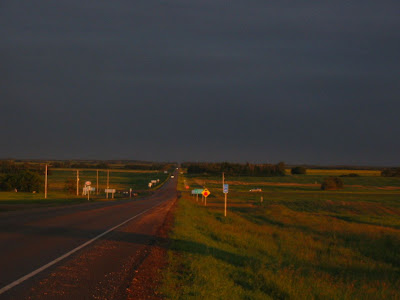 The evening light as we left town about 8:30.

We went to see our grandmothers yesterday and when we came home Scott wasn't feeling well, so wanted me to spend the night here, which I did. Thus I am still in my pyjamas and have been eating puffed wheat cake, which I'll blame for the headache I'm starting to get, though I did have oatmeal for breakfast. I made a double batch of puffed wheat cake, which is disappearing fast.

It's been cold and rainy for several days, thus cold at the other house, since the new oil tank was leaking and so the furnace has also been shut off. Imagine needing the furnace in July! Ridiculous.

There is a house concert this afternoon, The Re-mains, from Australia. If this headache doesn't go the other way I'll have to miss this one as I did the last one, and Don (the super organizer) will have my head. Apparently it's warmed up outside, at least that will make it pleasant if we're outside. This one is at someone's farm.

Before seeing our grandmothers, Scott was getting a headache because he needed to eat, so, because no nearby restaurant was open, we nipped into a bakery to see if they'd serve a small meal. The kitchen was closed but we noticed the clerk's tight orange blouse had a couple buttons open and a boob was exposed. We left and looked at each other and I said, "I wonder if I should tell her or if she'd just be mortified." If I was in her place I'd want to be told, so I decided to go back, buy coffee and a muffin, and I'd try to let her know without drawing attention from the three men at two tables who obviously hadn't informed her of the state of her blouse, though Scott was certain they would have noticed and appreciated it.

Scott got the coffees while I paid for them and the muffin and caught her eye, pointed surreptitiously to the front of my shirt, and then to hers. She looked down, gave a horrified gasp, and ran into the back to fix it. When she came out, redfaced, she thanked me for telling her and hoped the buttons hadn't been open for too long! I told her that at least her flesh looked good and she had nothing to be embarrassed about. When wearing this new blouse in future, she said, she'd know enough to put a couple pins in it. 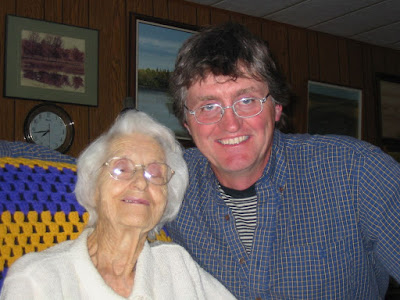 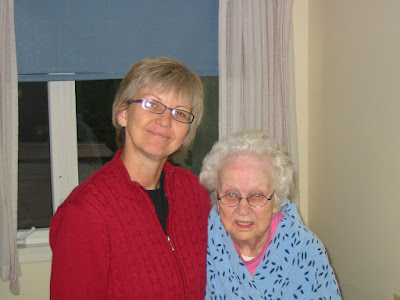 We also went to the local furniture store and ordered a set of microfibre-covered stuff: couch, loveseat, recliner. The set contains five reclining seats, so when all three of our boys are home there will be one for each of us if we want to watch a movie together. The display set in the store was a light almost-white beige, but we ordered a darker set, a sage green, from the catalogue. Scott figures the living room walls are too light so we need something dark for contrast, and I let him have his way as he may well be right and I am, believe it or not, not that fussy as long as the upholstery is solid and not patterned, and not leather, which I find too cold to sit on and never really do like the look of. We decided against the sectional containing the hide-a-bed we'd been considering, because our options for changing things around in the living room would have been severely limited with a hunk of furniture that size. Although, Scott said, in his opinion furniture is meant to be put in one place and left there. Hee! It must drive him nuts, living with me. What am I saying; I know it does. The number and variety of my shoe pairs alone make his head spin 360 degrees.
Posted by Blondi Blathers at 11:27 AM No comments: