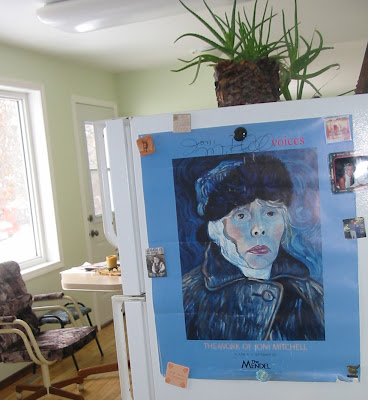 Things are peaceful around our house and the boys have been home all week, with classes shut down while the teachers busy themselves elsewhere.

Everett baked cookies one afternoon; I made eight loaves of bread yesterday, and Everett mixed up bagels, which I boiled before putting in the oven.

Karen dropped off some food for Buckminster Duckster III one afternoon and stayed for a couple cups of green tea. They enjoyed their week in Mexico. I asked if they'd go to the same place again and she thought not; it was uncrowded and quiet and perfect for a laidback holiday, but if you want to explore and do things you have to travel out from the little village where they stayed. Next time they'd opt for a more touristy location.

An uncrowded beach! That is right up my alley. There aren't enough of those.

Emil got a hold of Neil, so he drove out yesterday, stayed for a couple cups of tea, and left with a bag of Everett's cookies. Woulda had fresh hot bread if his departure had been delayed by a half-hour. He and Rose have been putting new flooring in their house and since he'd been sawing on the main floor, she was busy cleaning. We know what that's like. Neil's legs still get really sore after very little exertion, since he had a stroke several years ago. Someone told him that can go away, but it can take seven years. He's got his fingers crossed.

News of Uncle Bruce is that he's pretty tired, not going much further than to the shed for a cigarette ... and at the same time, that he and Shirley went to Denare Beach recently to babysit Karla's kids. That long drive (six or seven hours from here) and a couple active grandchildren require some energy, so maybe he's feeling better these days.

I haven't been to see Grandma for a month and although there is usually some reason -- road or weather is bad, something else is on, I'm lazy, Scott and I plan to go and then he doesn't show up till I no longer feel like going, Emil wants to go but has a cold and has been sneezing and sniffling all over the house, so on, so forth. There is always something. I am determined to get there this weekend. Maybe she forgets you were there five minutes after you leave, but she is always happy to see you and it's not only for her that I go, anyway; it's for me. And the boys. We will not have Grandma here forever.

Joni Mitchell sings and plays River, one of her most beautiful songs, in her younger days:

Posted by Blondi Blathers at 1:20 PM No comments: