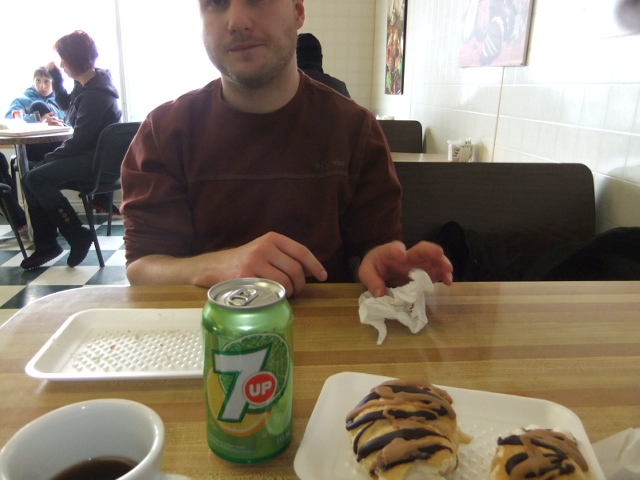 Emil's ears still feel "plugged," though his actual hearing is unaffected.
They have felt this way since October 2011.
They have been cleaned by doctors. He has visited an ear/nose/throat specialist. He's seen a dentist. He's seen a medical intuitive. He's had therapeutic massage (not enough yet). And today we were going to head off to Yorkton to see an acupuncturist.
But I decided that first, he should visit a relatively new clinic in town that offers shiatsu. That's acupuncture without the needles, isn't it?
This morning I phoned to cancel today's appointment in Yorkton, and that was lucky because it was for tomorrow anyway. I believed neither Emil nor Scott completely, mind you, when they both insisted I'd told them the appointment was today instead of tomorrow. On the calendar, I had it written into the square for Wednesday the 21st— last week. Go figure.

Emil was looking forward to spending the day together so I picked him up after lunch, even though his appointment for shiatsu isn't till Thursday afternoon. We stopped in at the clinic to do a quick "reconnaissance" and then picked our way over the icy sidewalk to the bakery a couple doors down.

I was going to have some dainty little delicacy with my coffee, but when Emil chose the cream-filled croissant, I thought What the Hell.  You only live once that I'm sure of.