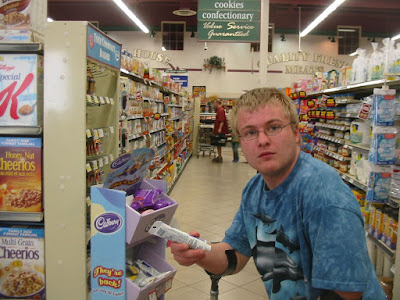 Caught in the act!

That's Everett's caption for the photo.

Emil was actually asking me what was in the tube. It was icing.

One of his favourite pastimes is going to the Co-op store. While I fill a shopping cart, he strides down the aisles and says a loud "Hello!" to anyone he knows. I can hear his crutches clicking away in the distance.

To anyone he doesn't know, he says "Hello, what's your name?" and often follows it with "How old are you?"

***
Monday after school
Me: “Come to think of it, I talked to Gunnar on the phone today. He’s got a new puppy— an English pug.”
Emil: “Did you ask Gunnar to sing something for you?”
Me: “No. Why would I do that?”
Emil: “I don’t know. I just thought you might.”
Everett and I laugh, and Everett says to me across the table, “One time I mentioned that Gunnar had been here, and Emil asked if you’d made him sing.”
Emil: “Do you want to hear Gunnar sing?” He is dead earnest, but Everett and I can’t help giggling. The question seems to come out of left field.
Someone has said something to get Emil thinking along these lines, but for the life of me I can’t remember what that might have been. It was probably me, too.
Posted by Blondi Blathers at 3:12 PM 1 comment: