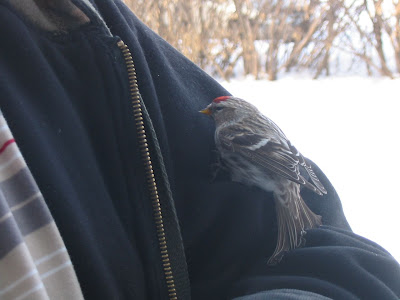 Birds hit our living room window almost every day; sometimes more than once a day. Most of them "stumble" midair and fly off to get their bearings in a nearby tree. This little redpoll had struck the glass hard, his fallen body embedded deep into soft snow below the window. Everett scurried out to scoop the tiny creature gently into his hand. Was it alive? Its eyes were closed, its head drooped, but wait! One eye opened, just slightly, to peek at us. After several minutes the bird was alert but still unmoving in the palm of Everett's hand, but when I spoke to it in soothing tones and tenderly caressed its feathered breast, it flew a few inches and clung to his bunnyhug. Twenty minutes later it attempted to escape to the sky, but crash landed at Everett's feet instead. He quickly grabbed it before Chloe Doodle the Dumpling Dog could check it out too closely. When the redpoll finally made a successful flight into the trees, Everett had been standing patiently in the yard for 40 minutes.
Posted by Blondi Blathers at 4:25 PM 5 comments: