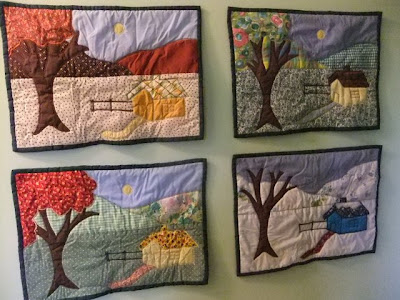 We are still moving, and still unpacking.
The basement is to be torn apart and fixed, so we were given warning that demolition was about to begin. Everett needed to shift his belongings upstairs. So I needed to empty the upstairs bedroom closet, which held the guts of my china cabinet. Some of them were wrapped in these place mats Mom made many years ago and gave to her aunt Jean. Before that they'd been taken out of circulation due to the certain knowledge that, used on the kitchen table, they would end up stained. I knew that would happen, but wanted them out where I could see them. Thus they're already a little discoloured in places, but oh well. So now here they are, on the wall outside the office door.

Other treasures were unwrapped and set out to await their destined display: 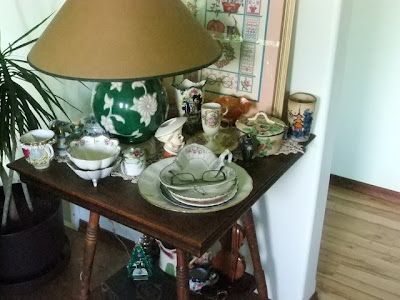 And finally yesterday the He-men hoisted the china cabinet over here for me: 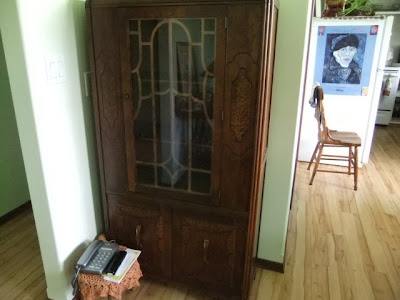 Yes that really is a phone with a cord. When's the last time you saw such a thing? Apparently every household needs one, because cordless phones don't work during a power outage.
Posted by Blondi Blathers at 12:05 PM 11 comments: