Trip to My Lu, My Darling 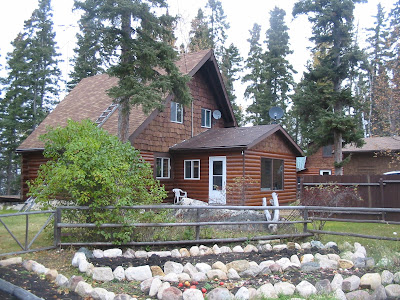 Along the drive north, I saw wondrous things of all kinds to put on the webpage. However, I was due to meet Luanne at quitting time in The Pas, where she works, so there was no time to dawdle. I promised myself that on the way home I'd meander and stop whenever something caught my fancy.

After not seeing Luanne for 15 years, it was pretty great to clap eyes on her. She looks better than ever. I swear, girls, you're all just getting more beautiful each year. (Can that be?) 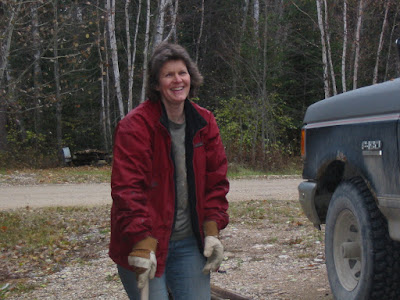 Apparently I kept Luanne from working from dawn till sunset all weekend, as she normally does when she's home instead of hanging out at her beau's part of the time. All we two lazy asses did was chop and puree her ripe garden tomatoes to freeze for winter soups, go for a six-km walk and bring in her wood supply for the next two weeks. (In the photo that's an axe in her hand. I was in charge of the wheelbarrow.) She also baked bread; she makes the best bread. But I fixed the clasp on her cookie jar! See, I at least tried to keep up with her. It was a lazy weekend for both of us.

The drive up was nearly an hour longer than it should have been because I missed a corner twice. Yeah, after that I got out my map. (Don't say a word, Janie.) Contrary to expectation, the highway was not lined with dark evergreens alone. The tamaracks were in full autumn colours, and that was good enough for me. Their gorgeous orange brightened things up.

To get to Lu's I'd taken the Swan River route, which is pretty much straight south of The Pas, and so on the way home on Monday I decided to cut east toward Hudson Bay instead. There is a long, long stretch with hardly anything in the way of buildings or people to be seen, but I did notice this little graveyard next to the highway and stopped to stretch my legs. There were at least four people buried there, and at least two of them had been army privates. 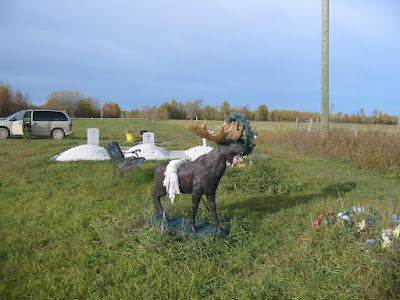 I also saw a healthy-looking coyote in the ditch, two bald eagles and a golden (I think) eagle. Of course, I didn't get photos of them. They move too fast.


Here's another moose standing next to a driveway. 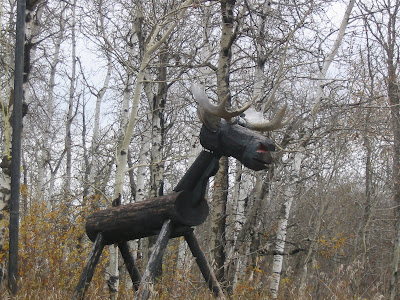 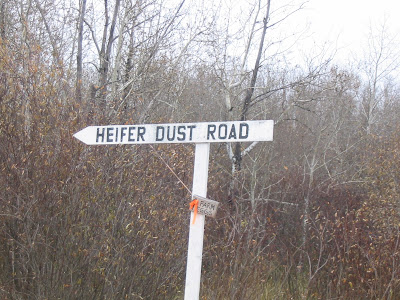