In Keeping With the Bird Theme 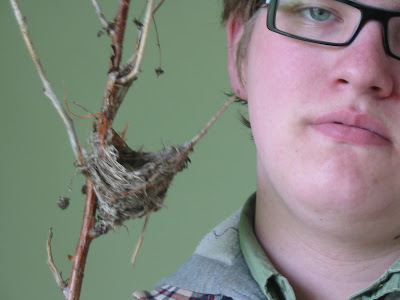 Everett holding a hummingbird nest that was found when the raspberry bushes were pruned.

Doesn't he look thrilled? This is his face of choice when anyone looks in his direction lately.

From Karen yesterday:
"The owl seems to be doing o.k., but I don't think he's eaten since I got him. The vet says to feed dog or cat food because he needs the calcium that's in it. He is sitting in a kennel on the table today just to try to get him used to humans, he's still a bit nervous."

The sun's coming out. We've had a grey and rainy couple of days; it smells divine out there. Aunt Shirley says it's not going to freeze again. I want to believe her, and will stick the rest of my bedding plants in the ground as soon as the ground dries up a little.
Posted by Blondi Blathers at 1:21 PM No comments: