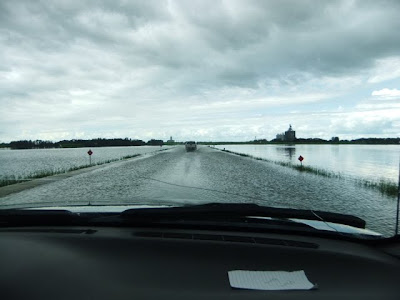 We were on our way to Saskatoon when we ran into this flooded part of the highway a few miles west of Humboldt. Portable traffic lights had been hauled out to both sides of the water so that vehicles would go through one lane at a time. The photo above is the view from the half-ton as we followed the fellow in front of us.

Shortly afterward the truck's engine light came on and the truck started acting funny, and it continued to do so for the next two days, but it did get us home. Our friendly local mechanic replaced an oxygen sensor (?) and all is well with the world again. This is a relief because someone whose vehicle acted just the same and whose owner subsequently drove it home from the city, as we did, ended up wrecking its catalytic converter. Which would have been a far more costly repair.

I have no idea if I'm using all these vehicle terms correctly; I'm trying to repeat what I've been told, but offer no guarantees that I'm getting any of it right.

So, it's Canada Day. A holiday for some. Not me; I'm working. But in between hours here at the computer, I'm getting a few things done. It's hot and humid outside so I can't stand to be out long anyway, and the mosquitoes are voracious, even in this heat. I've just drilled drainage holes in the dozen plastic plant pots I bought, and now I've got to mix peat with soil to ready the pots for the newest bedding plants. But the mosquitoes ... the heat ... waaaa! I either have to be covered up and dying of heat, or wear something skimpy and let my skin soak up the poison that is bug spray.

It'll be cooler tonight, but the bugs will be worse.

Not that I'm complaining. Oh no. We don't want more rain; and our house remains fairly cool due to the furnace fan blowing air up from the basement. So much so, that after sitting here for a while I have to pull on something with long sleeves or get goosebumps on my bare arms.
Posted by Blondi Blathers at 3:17 PM 3 comments: