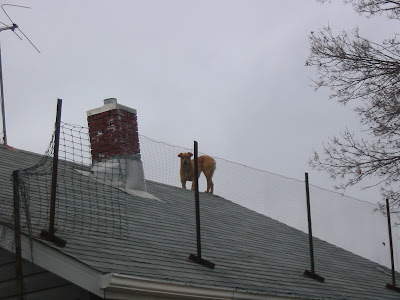 When we drove past this dog on the roof of a house in Yorkton yesterday, the man behind the wheel quickly made a u-turn and said "Get the camera out! Otherwise no one will believe us."

Had a visit with Agnes (my second mom) and Elgin McLelland while we were there, also saw Chrissy L-Bo on a meal break from her cooking job at Zeller's, and two people from Margo.

Came home with four cordless phones (our old one interfered with my iMac; it would wake it from sleep, and turn it on from Off) for the price of two; an ironing board because Everett bent the old one out of shape, not knowing how to put it down (not that I iron more than twice a year but when you have to, you have to); a new clothes brush and one of those sticky-rolly ones with tape on it (they don't work, either, for what I bought them for: the furniture we bought in August came with all this sawdusty stuff stuck in the microfibre and nothing removes it -- not the vacuum cleaner, not a damp cloth, not my fingernails without a lot of time and cursing, nothing -- I am going to have to go over it all with tweezers and what a pain in the ass that will be. Should've taken the furniture out of the boxes it came in, before December; then would have felt all right about returning it. As it is, the vendor shrugged when we told her in January, but she offered no options, solutions or apology; we won't shop there again, I guess, even though it's not her fault it took us four months to inspect our purchase); Louisiana hot sauce from Peavey Mart; new doorknobs for the office, bathroom and bedroom doors; $42 worth of organic apples, oranges and tomatoes from Superstore, since our local Co-op doesn't get organics in regularly (we aren't fans of big box stores and prefer to help keep our local businesses in business, but sometimes they just won't let us! Though the Co-op has now got a line of organic products in, so good for them -- they're trying); and a "thing" to hang the garden hose on.

We hate shopping. It's a dirty job. But you know: somebody's gotta do it.
Posted by Blondi Blathers at 10:08 AM 8 comments: