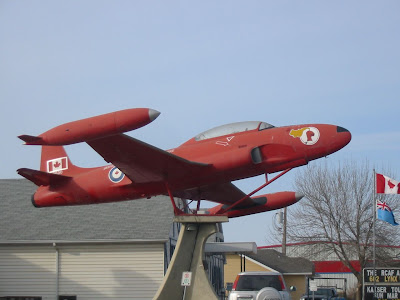 The store was just about to close when I drove past it on my way back from dropping the boys off with Gord in North Battleford, our halfway meeting-point, on Saturday. The fellow behind the counter was counting up his cash and gave me a few minutes to zip through the store and see what I could see. I ended up buying some funky birdhouses. Photos to follow one of these days. I hung them out in the oak trees this afternoon before hurrying off.

So Emil and Everett are gone to Edmonton. I've run into town for the past two afternoons — on Tuesday for a hair cut and today for my palliative care volunteering — and of course no trip to town is short and simple. Hell no. You always have to do 40 other things too: get the mail, stop at the library, go to the bank, pick up groceries, drop off things at the goodwill, take recycling in, blah blah blah. There is no such thing as a quick trip. Yesterday I wanted to wash the duvets and two of the quilts Mom made, so did a stint at the laundromat too, where they were done in an hour instead of the six it would have taken to clean them at the old house. We still don't have a washer and dryer hooked up at the new place so laundry remains a pain in the keester to do.

Among my CDs of choice this week is one by Leon Redbone. If Everett were here he'd be climbing the walls, because Redbone's songs are all so singable and I never shut up. Plus, I can whistle:

On the night table is A Mother's Story: the Fight to Free My Son David, by Joyce Milgaard with Peter Edwards. That is one terrible, sad story that makes my guts churn. Talk about not getting your prayers answered ... for more than 20 years. Talk about being screwed over by the police, the courts, and even your so-called friends.

Now that my running to town is done for this week, I hope to do some baking: more jam-jams, since the first batch disappeared like magic; some raisin-rye bread, as Cathy picked up some rye flour for me and I haven't made raisin-rye bread in some years; and bagels. We need some home-made bagels. Good intentions; how much do you want to bet I don't get more than one of those things done by Sunday. The inlaw clan is descending for the Easter weekend so I may be busier than usual-- that will have to be my excuse even though only Gunnar and his girlfriend will likely be staying at our house.

* Heather, tell your dad I picked up another bagful of books for him at the library today. All giveaways.
Posted by Blondi Blathers at 9:36 PM 4 comments: