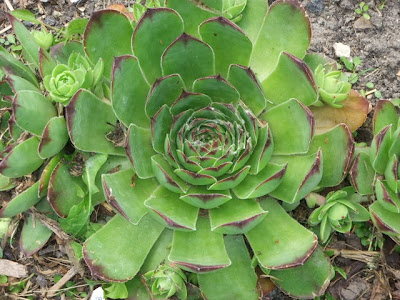 Between three and four in the morning a small dog stood on his hind legs, clawing at the sheet, asking to join us. “Was that lightning?” Scott asked as we both rose in the dark to see what was happening.
The sky lit and within moments a hard rain was hitting the roof. Rather than inviting Ducky to sleep between us (as he did the other night when there was thunder and he was afraid), I spread a throw on Mom’s rocking chair next to the bed, then covered him head and all, as he likes. Scott and I went back to bed but I wondered how the dogs outside, both afraid of thunder, were managing. Casper wasn't pacing and panting beneath the window, so maybe they'd already burrowed in somewhere. Should I shove tranquilizer pills into chunks of wiener and go out? Nah; this late in the game they aren’t likely to settle down much anyway, and it’s cold, and I don’t feel like getting dressed or wet.
The sky was blue through the bedroom window in the morning and I soon headed out for the medicine walk. Old Casper doesn’t always come anymore, as I'm long gone before she realizes I've left. This is as well, because when she does come it's too much of a workout for her. She comes back exhausted.
When I returned, I looked in the doghouse for her. It was empty so I made my way around the yard and over to the quonset and tractor shed, calling. Hm. If she was freaked out enough, would she have gone down the road to the old house like she used to do? I walked around the yard yet again, unwilling to believe she really wasn’t nearby, and then checked another shed in the farmyard where she’d gotten herself stuck for hours during the last storm. Scott had closed the door so she couldn’t get in there again, but I looked anyway.
I was up on the step, unlacing my workboots, when I noticed white fur sticking out of the bale house in the garden. Casper? I went over and called; no movement. She’s getting hard of hearing; I bent and patted her rear end; no response. No breathing. Gone.
She must have crawled in there headfirst to hide from the storm, and breathed her last.
She has been struggling a lot in recent weeks and in the storm last night her heart finally gave up. I hope she died feeling safe in there. Sweet old girl.
I can’t quite believe it. I hope she will yet wake up.
Posted by Blondi Blathers at 2:27 PM 1 comment: