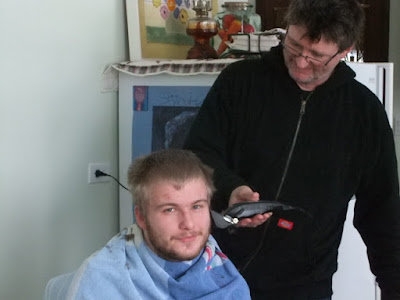 Emil's never been able to shave properly, and has found it a tedious task. He wouldn't mind having a beard, he insisted, and finally I stopped pushing him to shave. Go ahead, said I; it's your face.
And so he did. But when the beard gets all puffy, it's not pretty. Every time I'd take him for a hair cut, we'd ask the lady to trim the beard.
Then I found a beard trimmer in a store and voila, we can trim up his beard and whizz his hair off ourselves, since he likes it very short (a Grandpa Benson haircut, he calls it).
Here, Scott gives it a go. It looks like he could use a shave, himself. He'd been sick for a few days when this was taken, so we'll let that be his excuse. He's feeling better now, by the way.

"We should call him Scrappy Coco," Everett said, likening Scott to some film character.
Posted by Blondi Blathers at 12:44 PM 1 comment: