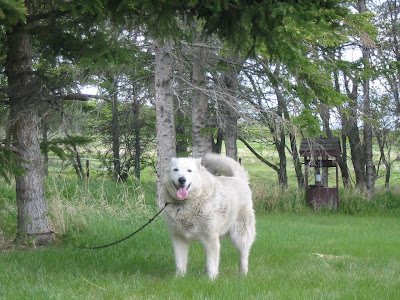 Can anyone identify this breed?

Miss Casper refuses to remain at Golden Grain Farm when I leave during the day to work at my computer. If I don't let her up into the back seat of my van, she'll walk the mile "home" and then bark to return in the van with me later. Last time she followed me she arrived with a pronounced limp. This morning she waded through a water-filled ditch while I weeded a flower patch at the end of the driveway, so there was no way I was letting her in the vehicle.
Alas, I have to play hardball with her.

She is much more active at Golden Grain Farm than at the old house, where she usually just lies about. At GG Farm she is walking all over the larger, more open yard, exploring or perhaps inspecting. Today she flushed a duck (northern pintail perhaps) from its nest near the wishing well behind her. No hatchlings, just eggs there.

The nest Scott found nearer the water now contains only a couple broken shells. Something must have taken the eggs because the shells from the nine eggs that were there are not around.

There is no owl report from Karen yet today so I offer my own:

At 5:30 yesterday I was standing at the edge of the wet garden, when a small light-brown owl, its body no more than a foot long, made its way past the poplar trees on the south side of our property. It got chased by a small bird or two, or it chased them— I'm not sure who was the aggressor. It floated past the slough and then came past me again and turned back once more to sit on a fencepost, swivelling its head, near the slough. Suddenly it flew up and dove into the long grass beside the water. I thought, "Oh no! I hope it isn't taking baby birds," and watched closely as it came again my way, carrying something in its claws. It flew right over the garden in front of me as if to show off the nice fat mouse it would have for supper in a few moments.
At 9:30 I went out again (the air was totally windless and smelled like heaven; blessed rain) and a small owl with slightly different markings and colouring flew past me a couple times, making me wish I'd taken the binoculars out in order to have a better chance of identifying it. Probably I am seeing a male/female pair hunting to feed their young.
Posted by Blondi Blathers at 1:14 PM 2 comments: