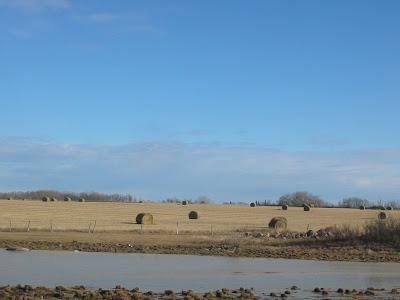 The harvest is done, and there's no snow.

The other night I made supper at the old place, lit a fire in the woodstove so the basement would be toasty for Scott when he arrived home, and then after waiting till about 8 for him get there, gave up and drove back here to GGFarm.
I stepped into the porch of this completely dark house, dropped my heavy purse, filled up containers of food and water for the dogs and took them back out to the front yard. Before coming in, I grabbed a basket of clean laundry from the van and when I got indoors carried it to the bedroom. There I noticed a still body in the bed, covered from head to toe. Must be Scott, I thought, but that’s funny – I didn't notice his truck when I drove in. Saying nothing, I went out to the entry and hung up my jacket while looking for his coat and shoes. Not seeing them, I began to get nervous: who the hell is in my bed and how the hell did he get in here? Then I saw Scott's cap on the floor and let my breath out.
“But how,” I asked, “did you get here? Your truck's not here.”
His grin was as wide and pleased with itself as a rainbow.
“I drove in right behind you,” he said.
“What? No way.”
“That’s not all. When you went into the house the first time, I came up on the step and stood outside the door. You walked right past me, and I slipped in while you were outside.”
“No way!” I said again. "You're full of it."
“Well, you are oblivious.”
I must be. Granted it was dark, I didn’t expect anyone to be standing there, and I had my hood up so wouldn’t have seen anyone standing so closely to my left. And I bet the bugger followed me with his headlights off, too; there is no way I wouldn’t have seen his truck behind me otherwise.
Hmph. I know I can be absent-minded and since I am a Brilliant Eccentric Aquarian Genius, it's only to be expected. But oblivious? Or, as Scott likes to say to me in another way, "Are they friendly spirits, Bullwinkle?"
Posted by Blondi Blathers at 1:16 PM