Scott's dad passed away last Wednesday in the nursing home where, due to health issues and dementia requiring 24-hour supervision, he lived for the past three years. While Ivan adjusted well to his new environment, he never stopped wanting to come home with whoever was visiting. In his mind, he had always put in a hard day's toil on the farm and would describe his labours in some detail. "If only other people worked as hard as me!" he said recently.

He left in a manner most people would like to make their exits, we figure: one minute in his chair pulled up to a table; the aide turns away to set something on the counter, turns back, and he is gone.

Ivan was all about farming: he loved the hardworking farmers' life, the land, the crops, the horses, the cattle, all of it. There'd be no suit worn on the day of his funeral; instead, he'd be duded up in blue jeans and a plaid shirt, which surely he would have chosen himself — the same outfit he wore every day to work on the farm.

With his family's approval, Scott decided to build his dad's coffin for the "western" funeral they were planning. On Sunday morning he got to work in front of the Quonset in our yard with his son Gunnar:

In keeping with the western theme, siding from one of the old granaries on the farm provided the covering for the casket:
Scott's sister Lynn pitched in*, as did her son Ryan: 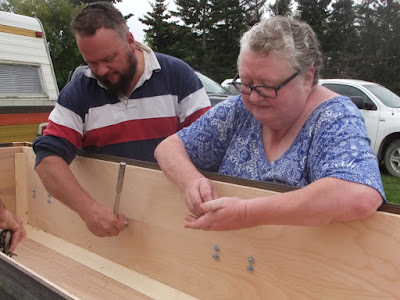 On Monday the coffin was taken over to Scott's mother's (and brother's) for final touches. Of course, plaid flannel:

This little decoration was added, a tribute to Ivan's life as a farmer: 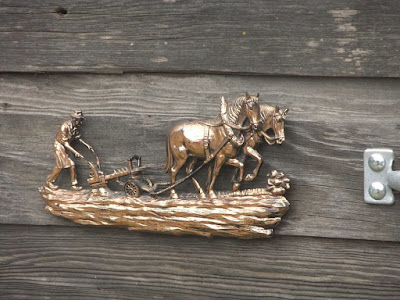 The coffin was then loaded up and taken to the funeral home. A little later it came back in a hearse, carrying Ivan's body. The top was removed out in the farmyard for one last viewing of a very beloved man by his grieving family, including nieces and nephews who live in the area. Some of Ivan's favourite things were tucked in beside him, among them the mitts he was always, still, looking for so he could go outside and get to work.

These sombre, painful, disbelieving moments were followed by the sealing of the casket and then one last drive past the land where Ivan grew up and spent most of his adult life. The hearse led the procession of vehicles, which made a six-mile loop on the gravel roads before Ivan took his last trip to town.

*Not everyone who helped construct and finish the coffin is shown in these photographs.  There was quite a large group working side-by-side, doing the one last thing they could do for their loved one, and doing it together.

You Commented on a Previous Entry
... and I Reply

Maggie Turner has left a new comment on your post "Birthday in the Field":
A cold and harvest season, what a birthday! Wishing a Happy Birthday to Scott, or is it a... https://www.youtube.com/watch?v=iL2Wm-PcfPo

Ha! I wish Scott had time for a tea party! Instead he's out in the field this morning (Saturday), coughing and hacking.

Maggie Turner has left a new comment on your post "Just Because":
The comments here are very insightful and have me thinking. I would call myself "sensitive" to what others say, as well as being "sensitive" to having upset others. But when I trust someone that they would care about how I feel, it is far easier to bear hearing words I don't care for; when that trust exists my reaction, immediate, or late, is welcomed in return. The flip side for me is when people feel free to impose their world view on a sitation, I often adopt the "do unto others" stance and impose a quite different world view into their universe... those conversations don't tend to last very long, and they seldom recurr between myself and the given individual. One person on Facebook told me she didn't want know what I thought, she only wanted to hear from people who agreed with her; and I found that kind of refreshing, because it was an honest statement, even if I didn't respect her approach.

He didn't even eat the ice cream or a piece of fudge when he came in after dark last night! That's when you know he's feeling crappy.